A dovish message from the European Central Bank was favorable for mortgage rates this week, while the major U.S. economic data had little net impact, and rates ended the week lower.

In recent weeks, there have been substantial downgrades to the growth forecast for Europe from a wide range of sources. With this in mind heading into Thursday’s European Central Bank (ECB) meeting, investors were anticipating that the ECB would adopt a more dovish (in favor of looser monetary policy) stance. In fact, the ECB did shift in this direction, and even more than expected. First, it extended the minimum period for which it will not raise benchmark rates by several months to the end of 2019. In addition, it will provide a fresh batch of cheap long-term loans to banks to encourage more lending and thus help boost economic activity. The ECB also sharply reduced its own forecast for GDP growth in 2019 from 1.7% to 1.1%. This news caused global bond yields, including U.S. mortgage rates, to decline. 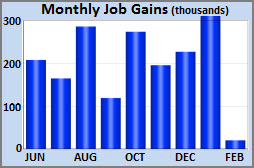 Friday’s Employment report offered a reminder that in an economy with about 150 million jobs, what may appear to be a large miss versus the expected levels still represents just a tiny fraction of the total pool of jobs. Against a consensus forecast of 175,000, the economy added just 20,000 jobs in February. Bad weather likely was one major factor behind the shortfall, as the Construction and Leisure & Hospitality sectors were particularly weak.

The unemployment rate declined from 4.0% to 3.8%, below the consensus of 3.9%. This was mainly due to workers returning after the end of the government shutdown. Wage growth was stronger than expected in February, with average hourly earnings 3.4% higher than a year ago, up from 3.2% the prior month, and at the highest level since April 2009.

Another closely watched economic report released this week clearly beat to the upside. The services sector accounts for more than 85% of U.S. economic activity, and the ISM national services index unexpectedly jumped to 59.7, which was well above the consensus of 57.0. Readings above 50.0 indicate an expansion in the sector, and readings above 60.0 have been extremely rare since record keeping for this index began in 2008.

Looking ahead, Retail Sales will be released on Monday. Since consumer spending accounts for about 70% of all economic activity in the U.S., the retail sales data is a key indicator of growth. The Consumer Price Index (CPI) will come out on Tuesday. CPI is a widely followed monthly inflation report that looks at the price change for goods and services. Durable Orders, an important indicator of economic activity, will be released on Wednesday. In addition, Treasury auctions on Tuesday and Wednesday could influence mortgage rates. Investors also will be watching for signs of progress in the trade talks between the U.S. and China.

The government shutdown which began on December 22 and ended on January 25 has caused delays in the release of some economic reports produced by government agencies and likely will continue to do so until the affected agencies get caught up. It is generally not known when the postponed data will be ready to be released.