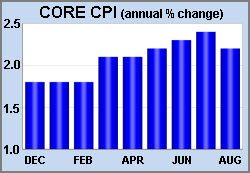 The most recent inflation data came in at lower than expected levels. The Consumer Price Index (CPI), a widely followed monthly inflation report that looks at the price change for goods and services, was just 2.2% higher than a year, down from an annual rate of increase of 2.4% last month. Lower inflation is positive for mortgage rates, but the reaction to the data was small.

The Retail Sales report released this week was mixed. Excluding the volatile auto component, retail sales in August rose just 0.3% from July, which was below the consensus for an increase of 0.5%. However, the July results were revised higher by an amount comparable in size to the August shortfall. As a result, the data was essentially neutral for mortgage rates.

Thursday’s European Central Bank (ECB) meeting produced no significant surprises and had little impact on U.S. mortgage rates. The ECB lowered its forecast for economic growth this year and next, but confirmed its plans to wind down its massive 2.5 trillion euro bond purchase program by the end of this year. ECB officials also said that they plan to hold the benchmark interest rate at current levels at least through the summer of 2019.