While there was some major economic data released this week, there were no significant surprises, and its impact on mortgage rates was minor. By contrast, news on trade deals caused a negative reaction, and mortgage rates ended a little higher.

The Trump administration long ago expressed an intention to end the NAFTA trade agreement which has been in place with Canada and Mexico since the start of 1994. On Monday, it was reported that a new trade deal had been reached with Mexico. Later in the week, the administration said that progress had been made with Canada, and at the time of this writing there remained hope for an agreement by the end of the day. The uncertainty surrounding the trade situation and the potential for escalation prompted investors to shift in recent months to relatively safer assets, including U.S. mortgage-backed securities (MBS). This added demand for MBS has been positive for mortgage rates. Thus, an easing of trade tensions this week caused the reverse effect, and the reduced demand for MBS pushed mortgage rates higher. 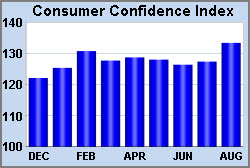 The latest reading for the primary indicator of confidence in current and future U.S. economic conditions suggested that consumer spending may remain strong in coming months. Consumer Confidence surged far more than expected to the highest level since 2000. A strong labor market, solid economic growth, and record stock prices have contributed to a high level of optimism.

There are two major inflation reports released each month. The core consumer price index (CPI) is more closely watched by investors, while the core PCE price index is the inflation indicator favored by the Fed. Earlier this month, core CPI for July rose to the highest annual rate of increase since 2008. On Thursday, core PCE showed a continuation of a similar upward trend. In July, Core PCE, which excludes the volatile food and energy components, was 2.0% higher than a year ago, up from an annual rate of 1.9% last month. After running at lower levels for most of the past six years, core PCE has climbed to the Fed’s stated target level for inflation of 2.0%. If the upward trend continues, at some point it might cause the Fed to tighten monetary policy more quickly, but comments from Fed officials suggest that we are not particularly close to undesirably high levels.

Looking ahead, the important monthly Employment report will be released on Friday. As usual, these figures on the number of jobs, the unemployment rate, and wage inflation will be the most highly anticipated economic data of the month. Before that, the ISM national manufacturing index will come out on Tuesday and the ISM national services index on Thursday. In addition, news on trade deals could influence mortgage rates.